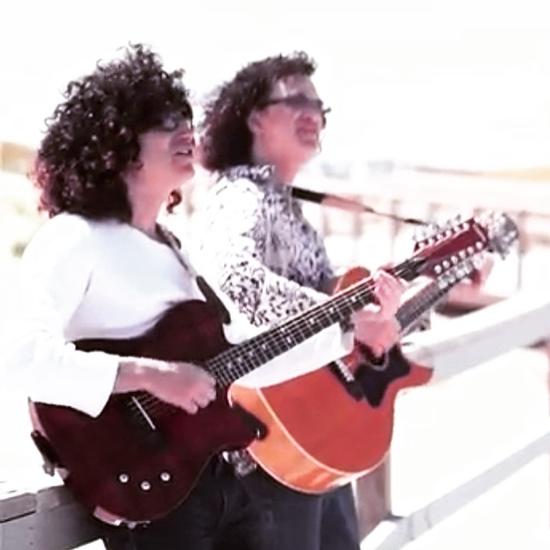 The Grab Brothers are true brothers—Larry and Marc Grab—with music that explodes in a kick-ass blend of “Retro for Today” lead guitar crunching rhythms, mystical-leaning lyrics and arena-filling vocals that pull your heart strings on a whim. But there’s more. These brothers can also strum you a pot-full of acoustical gems and have you singing along to their life-fulfilling stories even when you’ve never heard the songs before. Melora B., journalist for the North-Provincetown Banner recently wrote, “The brothers are like an “orchestrated tossed salad” with music emanating from flute, sax, harmonica, trombone, keyboards and electric and acoustic guitars, which gives them that full jam-band sound. “Their musical heart is enhanced by lead singer Larry Grab who really gobbles up time and verse with an insatiable hunger and passion that is hard to satisfy.” John Thomas of Lip Magazine had this to say: “It’s not just the catchy riffs and the memorable lyrics that distinguish the Grab Brothers Band from others but it’s their musical approach and the way they tell the story with real emotion, understanding and artistry. Larry and Marc can paint you a song about love, life and fantasy and connect you into it as well.” Ultimately, it’s the live performance of The Grab Brothers Band that traps you in their web of musical journeys. This is partially due to their musical theatre background. “Their performance and great ability to switch styles in an instant will keep you entertained like your first roller coaster ride,” says Gog at WKKL 90.7-FM radio in Boston, while Tim Emswiller at Noise Magazine adds, “Their sound is like going to a Jethro Tull, Allman Brothers, Grateful Dead and Rush concert with a touch of CSN&Y harmonies put in for good measure!” Their newest CD release Asian Red has garnered them constant airplay stateside as well as internationally. For example, their song “Holly Would,” the second cut on the CD, is getting great reviews and is on a regular rotation on WPXY 103-FM. Cape Cod, MA Most recently, the brothers penned a song about the Gulf oil disaster called “The Gulf Oil Blues,” for consideration as part of a movie score. The song has also recently been released to radio and is now on rotation KXBG Internet radio. The positive feedback was so strong that the music director there said, “It had to go into rotation!”